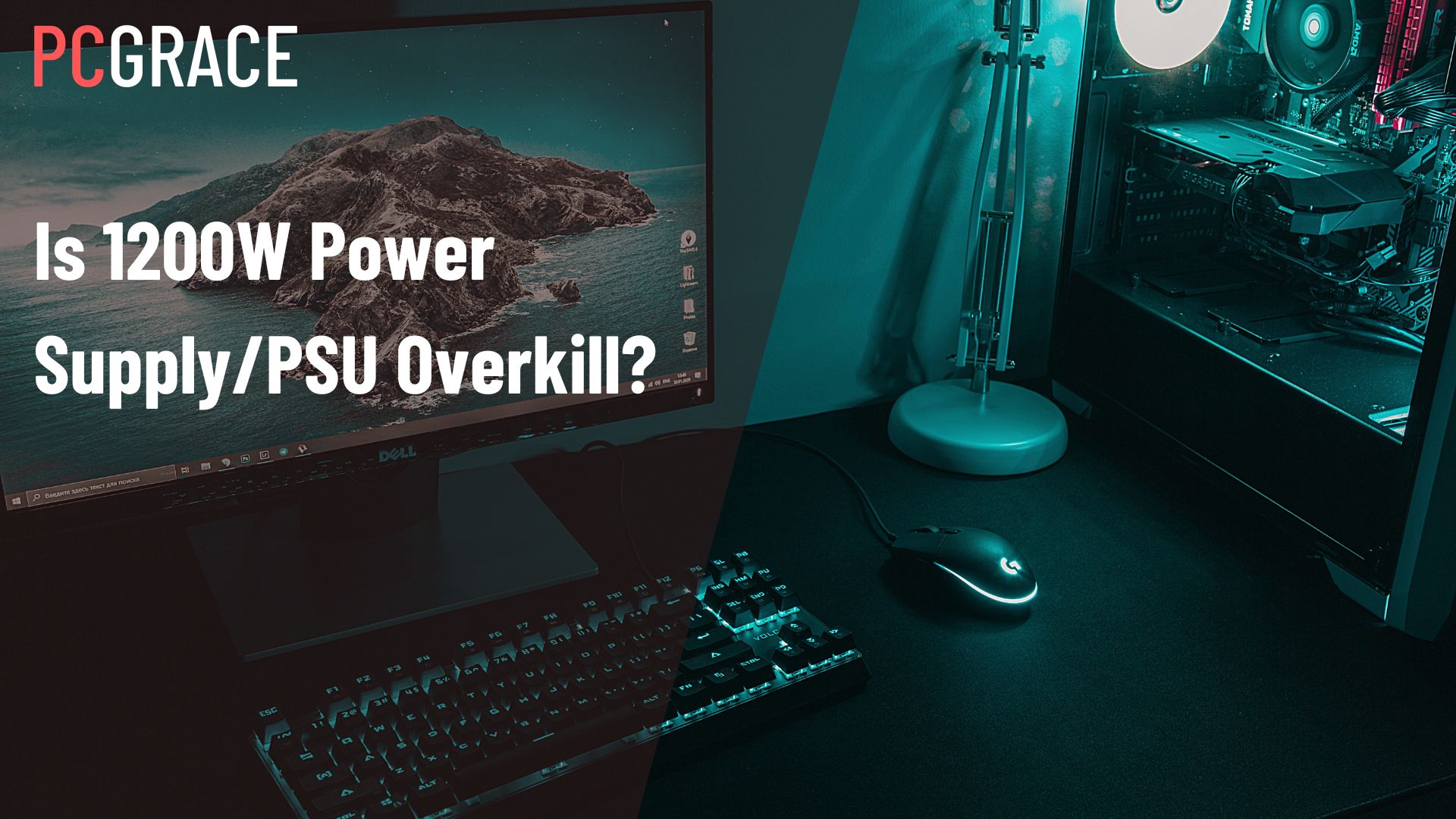 1200W power supplies are huge, they’re able to power most PC builds with relatively no issues, so why are they considered overkill?

Well, the majority of users, they can do perfectly fine with a 750W power supply, but there are some niche uses for a 1200W power supply.

But if you’re running high-end components, top-of-the-line graphics cards, and processors, then you may require a larger power supply.

And underpowering these types of components can have a detrimental effect on the performance, stability, and ability of the computer to perform certain tasks.

In general, 1200W power supplies are overkill, no average PC builder will need such a large power supply unless they’re running multiple graphics cards at the same time, or running a server.

Is 1200W Overkill For A Power Supply?

For a power supply, 1200W is enormous even by today’s standards where components such as the graphics card are needing more and more power.

So yes, 1200W is overkill for the average user, gamers and video editors do not need such a large power supply, but this doesn’t mean 1200W power supplies have no use.

So to fully understand whether you need a 1200W power supply, we need to understand what type of computer you’re building.

So, from a standard gaming PC point of view, 1200W does seem to be a bit too overkill, even for someone using an RTX 3090 TI.

But if you plan on running multiple graphics cards, then 1200W is definitely not overkill. The recommended power supply for the RTX 3090 in SLI is 1200W+.

This is because a single RTX 3090 requires at least an 850W-1000W power supply, so the 1200W unit will ensure that you have enough juice to power them both.

Is A 1200W Power Supply Overkill For Video Editing?

CPUs don’t usually consume as much power as the graphics card, but the CPU is still one of the main power consumers in a PC build.

So your standard video editing PC could do fine with just a 700W power supply with a mid-top range dedicated GPU such as the RTX 3070 or the RTX 3080.

However, CPUs are becoming more and more power hungry, this is because Intel and AMD are pushing clock speeds with their latest generations (Intel 13th series & Ryzen 7000).

We’re expecting Ryzen to finally break 5GHz, and Intel is beginning to push 6GHz, and with super high clock speeds, you can expect high power draws.

What Increases A Computer’s Power Requirements?

All components and peripherals connected to your PC will consume a level of power, that includes fans, storage devices, and PCIE devices.

But it’s mostly the GPU and the CPU that will consume the majority of the power, the GPU is definitely the most power hungry out of the two though.

But components such as the RAM, SSD, HDD, Coolers, and Motherboard will consume power, but not to the level as the CPU and the GPU, you can usually disregard their power requirements.

So, primarily focus on the CPU and the GPUs power requirements when building a PC, you don’t need to waste time calculating how much power the fans or the RAM takes.

Is Having An Overkill Power Supply Bad?

If your PC doesn’t need a 1200W power supply, then your PC will just draw whatever power it needs, it will never draw the full 1200 watts of power.

But, you could save a ton of money upfront by going with a power supply that closely matches your PC’s requirements.

Other than saving power, an overkill power supply doesn’t negatively affect your PC build in any way, your PC just has a ton more headroom which can be beneficial when upgrading.

And no, your components won’t get damaged because you used a power supply way out of your PC’s specifications unless the power supply you bought is very low quality.

If you happen to need a 1200W power supply, then there are a few brands that are highly reputable, and sell some of the highest quality power supplies on the market.

SuperFlower is an OEM, and they’re responsible for some of the highest quality power supplies on the market, they take pride in what they sell, and they offer long warranties as a testament to their quality.

Corsair is a power supply brand, they sell some quality units such as the Corsair HX1200I which could go amazing in any build.

EVGA is a power supply brand they sell quality power supplies, they’re mostly gamer orientated, but the EVGA P2 1200W is an amazing unit that can be used in any build.

Think big, like server big, this is where you’re going to see the majority of 1200W+ power supplies being used.

This is because some servers run up to 6 GPUs at once, especially the servers that run crypto-mining operations.

So, your average gamer, video editor, or streamer does not need a 1200W power supply, you can save more money buying what you actually need.

1200W Is Great For Future-Proofing

From a future proofing perspective, the 1200W may seem like a necessary investment to many, this is because GPUs and CPUs are constantly getting more power hungry.

The RTX 40 and the AMD 7000 series graphics cards are expected to consume a record-breaking amount of power, so you must be prepared.

But, if you’re a mid tier gamer not looking for an overkill PC build, you can probably do fine with a 750-1000W power supply.

In our verdict, 1200W is definitely overkill, there’s a niche purpose for it, but the average user doesn’t need a 1200W power supply.

Otherwise, if you’re running a server, or a multi-GPU config, then a 1200W PSU is necessary, but the average gamer or video editor won’t be doing this.